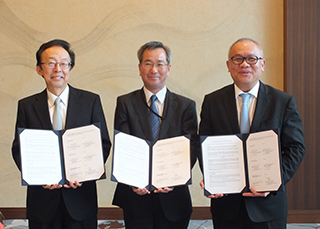 After the successful completion of a prelim joint feasibility study for potential development of Butadiene derivatives in Thailand based on a Memorandum of Understanding signed by Kuraray, PTTGC and Sumitomo in September 2015, three partners decided to move forward the project to the early phase of engineering study to perform Front End Engineering Design by signing HOA. The Final Investment Decision (“FID”) shall be made in end of 2017. Equity proportion and other details are being under consideration.

The F/S will be targeted to start operation of 13KTA High Heat Resistant Polyamide-9T (PA9T) and 16KTA Hydrogenated Styrenic Block Copolymers (HSBC) in Hemaraj Eastern Industrial Estate (Map Ta Phut Complex), Rayong in Thailand in late 2020. Butadiene as a key raw material will be supplied by PTTGC in the industrial area.

In addition Kuraray will solely conduct the F/S of 5KTA 3-Methyl-1,5-Pentanediol (MPD) which is one of Kuraray’s Isobutene derivatives in same site of plants of Butadiene derivative. The FID will be made in end of 2017 and the start operation will be targeted in late 2020. Isobutene as a key raw material will be supplied by PTTGC in the industrial area.

Kuraray will pursue the global business expansion for Butadiene and Isobutene derivatives in combination with the competitive supply of raw material and utilities from PTTGC and PTT group, and Sumitomo’s global trade network, and Kuraray’s capability and know-how of the production technology and sales & marketing.