The Story of the Birth of New Products: KURALON and PVA

The Story of the Birth of New Products: KURALON and PVA

PVA is a water-soluble synthetic resin that was discovered in 1924 by German Nobel Laureate Dr. Hermann Staudinger. Kuraray was the first company in the world to develop technology for mass producing PVA. In 1950, Kuraray was ﬁrst in the world to commercialize polyvinyl alcohol (PVA) ﬁber, under the name KURALON. It was the ﬁrst synthetic ﬁber invented in Japan using this resin as an intermediate material. The research accumulated through this process serves as the foundation for the component engineering approach taken by Kuraray. Not only is this approach the basis for the development of high-performance products that support the present PVA business, but it is also the driving force behind the successive creation of diverse and original product lines such as the high-performance resin EVAL, man-made leather CLARINO, and a range of isoprene chemicals. 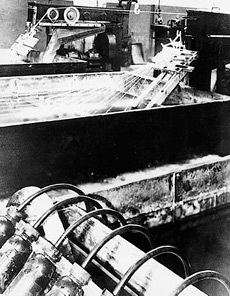 PVA (polyvinyl alcohol) was created in Germany and then developed further in Japan. Although research into synthetic fibers first began during early years of the Showa Era in Japan, results started to take form in 1939. The first Japanese produced synthetic fiber “Synthetic No. 1” was born under the guidance of former Professor Ichiro Sakurada of Kyoto Imperial University.

Kuraray, which had pushed forward with research into synthetic fiber from early on, began to look for ways to turn this research into useful industrial applications as quickly as possible. Although these efforts were temporarily interrupted by the effects of the Pacific War, the original trial production facility was restored in 1948 and research was resumed into the development of a polyvinyl alcohol-based synthetic fiber. This is when Kuraray began to take up the challenge of commercializing PVA fiber.

Then President Soichiro Ohara summoned the members of the R&D team to his home, where he once again confirmed whether or not it was technically feasible to commercialize this material. It is said that everyone responded in unison indicating their confidence that it could indeed be done.

Once Kuraray was able to get a trial production facility up and running and produce samples of KURALON, President Ohara went ahead and held an exhibition of this new material at the main Mitsukoshi department store in Tokyo the following year in 1949. The expectations for Japan’s first synthetic fiber far exceeded anything imagined, with numerous key government and business leaders of the time, including Prime Minister Shigeru Yoshida, visiting the exhibition.

However, financing the next stage of mass production was a major problem. It would require massive amounts of money, exceeding some ¥1.4 billion (equivalent to about ¥50 billion today). Since the capital of the company was no more than ¥250 million at that time, taking on such a business endeavor was quite risky.

In order to raise the necessary funds, President Ohara went as far as negotiating directly with the Governor of the Bank of Japan seeking his cooperation. At the time, President Ohara fervently argued that the funds were not for building up a business for the profit of a single company, but were to be used to build up the fiber and textile industry of Japan. His efforts paid off in the form of a syndicated loan from fifteen banks. 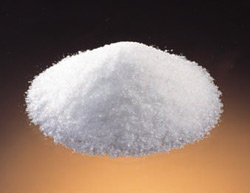 Once the prospect of funding became certain, work began immediately on plant construction, and full-scale output of KURALON started in 1950. However, rival firms soon entered the synthetic fiber market one after another as a result of the special procurement boom that accompanied the Korean War, which broke out in June of that same year. This led to fierce competition in technical development aimed at improving quality.

In contrast to other companies that introduced manufacturing technologies from overseas, Kuraray maintained a policy of developing technologies and techniques on its own. Inevitably, technological development was generally behind that of the competition for a time. Especially around 1954, while the demand for other synthesized fibers such nylon was growing and profitable, manufacturers who had later entered the PVA fiber market soon withdrew, because of the technical difficulties involved in the manufacturing process. As a result, some banks became very nervous about their financing of Kuraray, which placed the company in a very difficult financial position.

It was the R&D team and the sales staff supporting them, with their belief in the power of technology, who took on the challenge of overcoming these difficulties. Upon hearing that the R&D team had developed an extra strength KURALON fiber using a method to partially polymerize1 PVA, the sales staff developed a market for fishing ropes and nets. Good news followed with the sale of KURALON student uniforms exceeding those made of cotton. These accomplishments firmly placed Kuraray in an impregnable position in the market. Further demand for KURALON was expanding in the private sector thanks to development of public demand encouraged by a government policy of fostering the synthetic fiber industry. This policy was introduced by the Conference within the Cabinet to promote demand in the government sector. In 1959, total production of KURALON grew more than ever, with more than half the company’s earnings coming from KURALON related sales.

President Ohara made clear his strong belief in independent self-reliance in the company newsletter as follows:
“It is not desirable for us, now or in the future, to overly praise any method or approach used to improve oneself, whether it consists of simply copying and adapting an existing method or entails purchasing the knowledge from others in the form of an acquisition. If we ever forget that those things truly worth having are only found within ourselves and are acquired through our own dedication and effort, this then would in effect be no different than casting away all hope for the future.”

It was this very corporate culture of putting top priority on the ability to develop truly original technologies and techniques that made it possible for Kuraray to develop high value-added products imbued with originality.

Pride as a Pioneering Enterprise 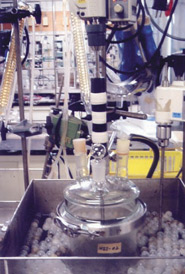 Since Kuraray developed a system for mass producing PVA resin, this resin had only been used within the company as a raw material in the production of KURALON. Production of PVA resin for commercial use began in 1958. It was anticipated that demand would grow for the material as a fiber sizing agent and paper processing agent. However, initial demand for PVA took off slowly due to sluggish demand for KURALON caused by a major economic recession known as the Nabezoko Keiki (bottom of the business cycle), which necessitated a reduction in the production of KURALON.

However, the Oil Crisis in 1973 changed the situation drastically. Kuraray downsized the PVA research and development department, reflecting the accelerated fall of business performance. Most of the commercial PVA resins sold for the market were made for general purpose use; therefore, users were not overly concerned about differences in quality. Kuraray overlooked this fact and unfortunately reached the mistaken conclusion that it no longer needed to conduct any further research.

This not only led to a sharp decline in the total number of patent applications from Kuraray, which previously had exceeded several dozen applications each year, but also resulted in the company gradually losing its competitive edge in the PVA resin business, mainly in areas such as fiber and textile processing and paper processing.

Exterior of the PVA research laboratory
(Kurashiki, as of February 2006)

Concerned voices from the workplace crying that the company could no longer afford to go on this way moved management to restart PVA resin research and development five years after it had been downsized. The main focus of the research was on the development of products that would be competitive in specialized areas rather than on general purpose products. Thus, although, the development of PVA resin technology had in one sense matured, high-performance PVA resin looked promising in that further added value could be realized by specializing in various characteristics of the substance.

Specific subjects of research were entrusted to each scientist of the R&D team. The morale of the team soared, motivated by an ambitious desire to achieve success, and the competition between researchers intensified. Since the high level of basic technology needed to produce general purpose PVA resins already existed and the work environment was also revitalized within the organization, the total number of patent applications soon multiplied. This formed the cornerstone of research and development that supported the business of the next generation. 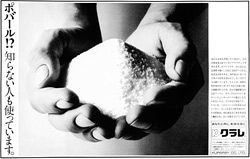 Following the mid-1970s, a series of influential products using the company’s proprietary technologies appeared on the market. This included high-performance resins used as paper processing agents, polymerization stabilizers for polyvinyl chloride, high-purity polymers used for medical products and fine ceramic products, and CP polymers for use in thermal melt molds. One technology that stood out among these products was the development of silanol-modified2 PVA, which now supports the foundations of the PVA business.

The purpose of paper processing agents is to increase the surface strength of paper by coating it with a PVA solution to prevent paper breakage during printing operations and to prevent the inorganic molecules of the filler3 used in the paper from adhering to the printing rolls. However, problems existed with mainstream coating methods in that they allowed existing PVA aqueous solutions to penetrate into the paper. In order to address this problem, research was undertaken based on the idea that adding reactivity radicals to PVA would cause the PVA emulsion to react with the filler in the paper when it came in contact with the paper and become thicker, thereby making it more difficult to penetrate the paper.

Significant progress was made in the research based on information found while reading reference works that stated, “silicon4 is light and easily combines with other elements.” PVA resin with multiple silanol modifications was synthesized via saponification5 by copolymerization of vinyl monomers and vinyl acetate in various ratios, after which the properties of each modification was analyzed. The results showed that at a certain degree of modification, once the emulsion was applied to the paper, it penetrated less and tended to stay on the surface layer of the paper.

Because the reactivity of the silanol group was vigorous and stability of emulsion viscosity degraded as the degree of modification became higher, it was quite difficult to determine a degree of modification for each usage or purpose. After a tremendous amount of effort, three types of sample products were completed and introduced to the paper milling industry. Many companies showed particular interest in one of these products. This product was used as paper processing agent for inkjet printing paper.

Inkjet printers work by spraying small drops of different colored ink on paper. These drops of ink then bind with inorganic pigment particles that are coated on the paper. However, existing paper processing agents blur the color due to the low ink absorbency of the pigment particles. Silanol group modified PVA was revolutionary because it could suppress such blurring.

Inkjet printers became quite popular in the 1980s. Kuraray bought a test printer before entering this market, and researched and improved suitable coating agents that best matched the printer. The current special trade name silanol-modified PVA was born as a result of repeated trial and error. Kuraray is the only company in the world to produce PVA modified with silanol groups, which has grown to become a major source of revenue in the PVA business.

Kuraray has endeavored to develop uniquely competitive types of PVA based products such as optical-use PVA film, which is crucial for LCD (liquid crystal displays) and holds the predominant market share in this area. Kuraray will continue to face numerous challenges not only in existing areas but also as it continues to explore ever broader new horizons and applications that no one else has ever tried before.