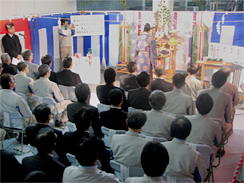 Kuraray Co., Ltd. invested approximately ¥2 billion to enhance its polyvinyl alcohol (PVA) fiber/KURALON production capacity by 5,000 tons annually at the Okayama Plant's existing facilities (Okayama City, Okayama Prefecture). A completion ceremony was held on December 4 and production commenced. Thanks to this expansion, the annual production capacity of KURALON has now increased from 35,000 tons to 40,000 tons.

In 1950, Kuraray commenced production of KURALON—Japan's first synthetic fiber with PVA as a raw material—at its Okayama Factory (now known as the Okayama Plant). KURALON was initially used for clothing such as school uniforms, as well as for fishing nets, rope, and agricultural and marine materials. By taking advantage of the material's merits, including its high strength, high elasticity, low extensibility and alkali resistance, applications for KURALON have broadened and it is now used in fiber-reinforced cement (FRC), paper, nonwoven fabrics and rubber materials.

Amid a major worldwide movement to control asbestos in recent years, the use of FRC in residential roofing material and as a construction material is steadily expanding. Up until now, major existing FRC markets have mainly comprised Western Europe and Japan, but market expansion is expected in emerging countries in Eastern Europe, Asia, as well as Central and South America. Consequently, the current facilities have been expanded in order to accommodate this vigorous demand.

Now and into the future, the KURALON business is one of the core vinyl acetate-oriented businesses that the Company is aiming to expand. Excluding China, as the world's No. 1 supplier of these materials—possessing an 80% market share—Kuraray now has an enhanced ability to respond to user needs due to the expansion of these manufacturing facilities. Furthermore, the expansion provides an opportunity for Kuraray to raise the proportion of its high-strength-type differentiated products, as it takes on the challenge of improving production techniques with a focus on ascending to the next stage of industrial science. 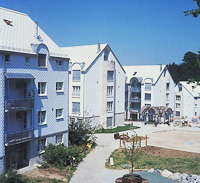