An article about Kuraray Co., Ltd.'s Kuraray Workshop, which is located at its Niigata Plant, appeared in the June issue of Hataraku Hiroba magazine, published by the Japan Organization for Employment of the Elderly and Persons with Disabilities (JEED).

Kuraray Workshop was established in April 1997. With property provided by Tainai City (formerly Nakajo-machi) and training know-how and daily support offered by Niji-no-Ie (literally translated as "Rainbow House," a vocational aid center for mentally challenged persons), Kuraray employed intellectually challenged persons, established a workshop and provided jobs for them. Upon its establishment, Kuraray Workshop drew attention from across Japan as a unique way to create jobs through three separate entities: public administration, welfare institution and private company. The business was commenced with five mentally challenged employees, but the number of such employees has steadily increased since then, and currently Kuraray Workshop boasts 20 employees, with not one person having retired so far.

On May 27, 2007, Kuraray invited public administration officials, including the mayor of Tainai and other concerned parties, to Niji-no-Ie and held a ceremony to mark the 10th anniversary of the facility. 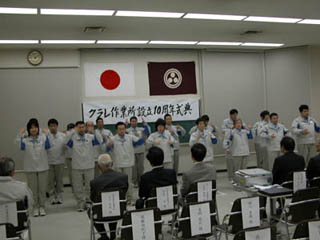