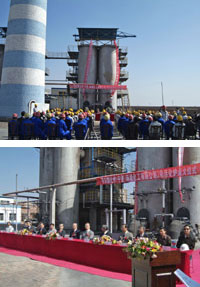 In order to meet Japan's insatiable demand for activated carbon, which is used in the treatment and removal of odors and dioxins from sewage and drinking water, Kuraray Chemical planned a second stage of construction to enhance production capacity by another 1,000 tons per year and invested ¥130 million. On September 8, 2006, a ceremony to commemorate both the completion of the second stage of construction and the one-year anniversary of the completion of the first stage was held on site. With the realization of a total annual capacity of 2,000 tons, sales will begin from November, following trial operations.

The production expansion and the smooth commencement of this business in China have contributed to the strengthening of operations and the establishment of a triple-axis manufacturing structure for activated carbon that includes Japan's Tsurumi Plant, located in Bizen City, Okayama Prefecture, and joint venture Cenapro Chemical Corporation in Cebu City, the Philippines.

Kuraray Chemical is now promoting the development of a global sales and marketing structure to complement its triple-axis manufacturing structure. Accordingly, as of October 6, 2006, Kuraray Chemical dispatched one representative to Shanghai and began sales activities that include India—along with China and Southeast Asia—in its marketing scope. Furthermore, plans to accelerate sales and marketing activities in Europe, India and the United States as a unified marketing territory have been effected through the establishment of a single representative post in Germany on October 26, 2006.