The Company believes that maintaining appropriate relationships with various stakeholders and fulfilling social responsibilities through establishing a corporate governance system that ensures effective and fair management will contribute to the long-term and sustainable enhancement of corporate value.

The Company has adopted the governance system as “a company with a board of corporate auditors.” Under this framework, the Company has established a corporate governance mechanism centered on its Board of Directors and Board of Corporate Auditors to improve the effectiveness of the supervisory and monitoring mechanism, while maintaining management efficiency, and to handle issues including management remuneration, selection of new company officers, internal control and risk management.

By establishing this mechanism as described above, the Company believes that the effectiveness of the supervisory and monitoring mechanism will be improved, while maintaining management efficiency, contributing to the long-term and sustainable enhancement of corporate value.

The Company has worked continuously to strengthen corporate governance by taking steps, such as establishing the Management Advisory Committee, separating supervision and execution functions through the introduction of the Executive Officer System, appointing and increasing the number of Outside Directors and Outside Corporate Auditors, establishing the CSR Committee and the Risk Management and Compliance Sub Committee, and Analysis and Evaluating of the Effectiveness of the Board of Directors.

The Company will further strengthen the corporate governance system through measures such as managing compliance risks in its overseas operations. 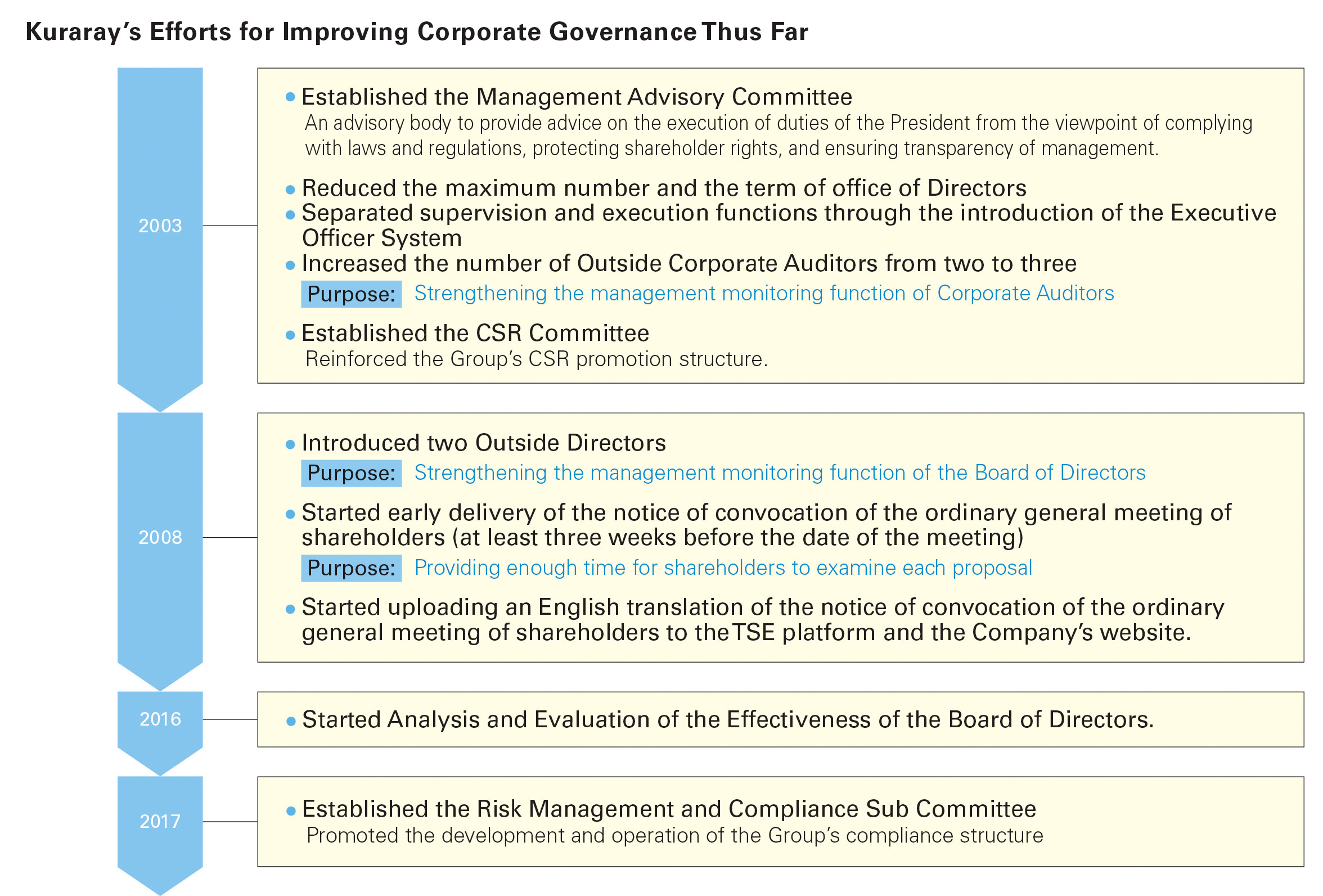 The Board of Directors and Business Execution Body

Board of Corporate Auditors and Internal Audit

The Corporate Auditors regularly have meetings with the Accounting Auditor to receive reports on audit planning and the implementation status and content of audit. Also, they receive reports on the internal audit result by the Internal Auditors Office (consisting of nine members). The Corporate Auditors also serve as corporate auditors of core subsidiaries to conduct subsidiary audits as needed and attend the Group Auditor Liaison Meeting, which consists of corporate auditors of the Group companies and is held periodically and obtain information about each Group company through the meeting.

As an advisory body to provide advice on the execution of duties of the President from the viewpoint of complying with laws and regulations, protecting shareholder rights, and ensuring transparency of management, the Management Advisory Committee has been established. Currently, the Committee is comprised of six permanent members; three outside experts with abundant experience and broad expertise in economics, finance, management, etc.; one Inside Director (President); and two other members (Advisor, Outside Corporate Auditors). Chaired by the Advisor, the Committee is, in principle, held twice a year to provide advice to the President on such matters as important management policies, management issues, resignation of the President, candidates for the successor and remuneration, etc. 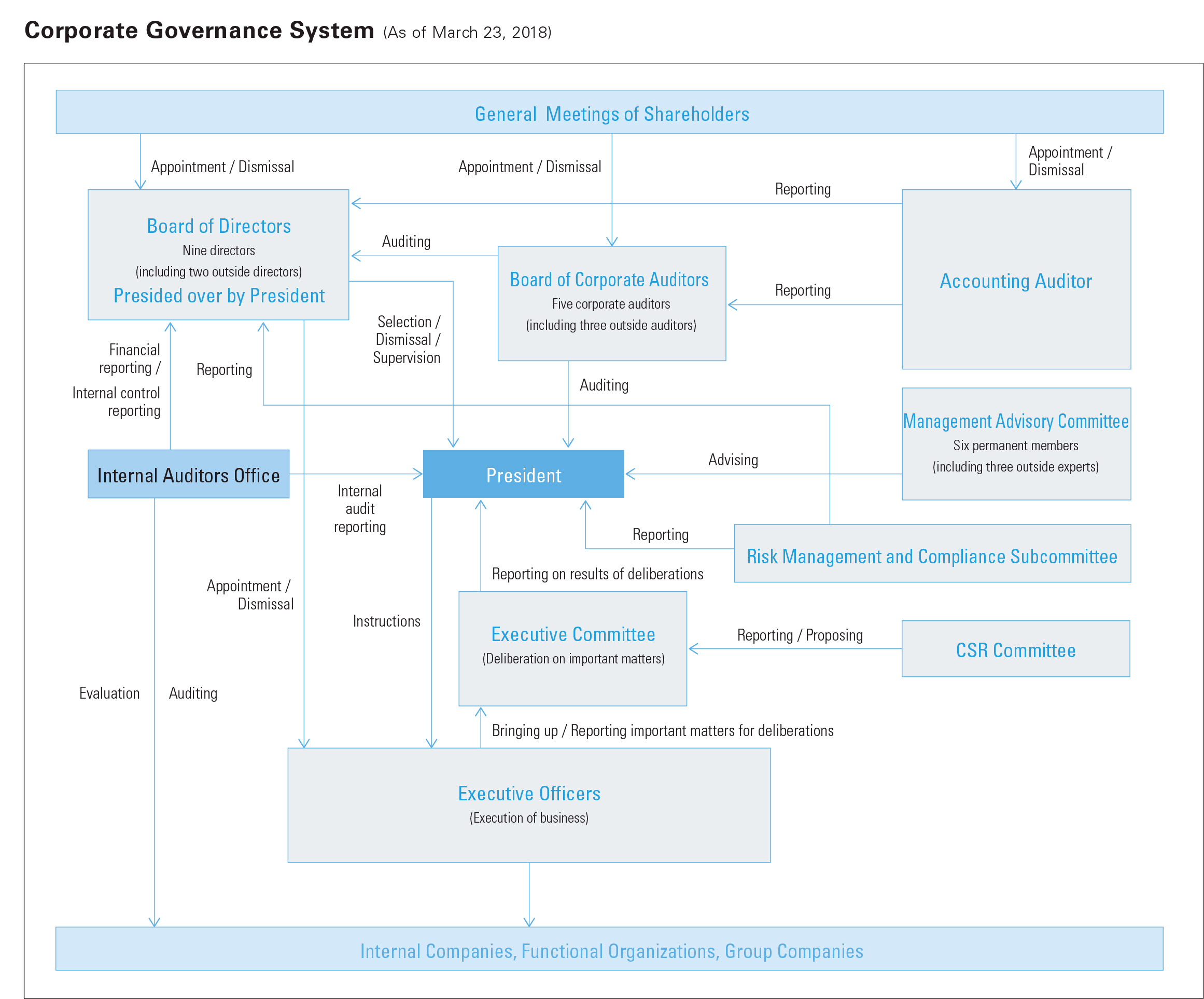 Independence Standards for Outside Officers

Policies for Determining the Remuneration for Directors

The Company abolished the bonus scheme to Directors and introduced a performance-linked remuneration system in July 2006, thereby strengthening the incentives of Directors for increasing the Company’s corporate value. In addition, to respond to the increase in the amount of performance-linked remuneration in conjunction with the improved business performance, it was resolved to increase the maximum amount of annual remunerations to Directors to ¥800 million from ¥450 million (including ¥100 million annually for Outside Directors) at the Company’s 131st Ordinary General Meeting of Shareholders held on June 22, 2012.

Evaluation of the Effectiveness of the Board of Directors

Analysis and Evaluation of the Effectiveness of the Board of Directors

(2) Outline of analysis and evaluation results

Furthermore, proposals made during the evaluation last year for the purpose of enhancing the effectiveness of the Board of Directors, namely, “the timing of materials distribution” and “content and quality of materials,” were confirmed to have improved through efforts such as ensuring distribution of materials in advance, and preparation of written summaries of proposals.

Based on the results of this evaluation, the Company will examine and implement necessary measures in the future to make discussions more lively and productive at the Board of Directors meetings.