The Story of the Birth of New Products: CLARINO

The Story of the Birth of New Products: CLARINO

A Material That Stands the Test of Time

CLARINO was developed in 1964 as a man-made leather with the structure and functionality of natural leather through the application of chemical technology. It is light, tough, flexible and water resistant. CLARINO is used for shoes, bags, school bags, sporting goods, jackets, sofas, and more. Although the R&D team faced many challenges during development, they persevered through hard work and trial and error. This is the story of CLARINO and how it earned its reputation today as a brand synonymous with high-quality man-made leather.

In 1963, the Research and Development Division faced the task of developing a new material to follow up on the success of KURALON. Following the Second World War Kuraray was ﬁrst in the world to commercialize polyvinyl alcohol (PVA) ﬁber, under the name KURALON. It was the ﬁrst synthetic ﬁber invented in Japan. In 1963, Kuraray succeeded in exporting a PVA ﬁber production plant to China, making it a core business base for KURALON.

Kuraray began to consider new business fields capable of supporting future growth as opportunities for R&D were unlimited at that time. R&D personnel numbered 1,500, the ratio of R&D expenses to sales was nearly 5%, and more than ten pilot plants were in operation.

As the textile industry faced economic recession, Kuraray hastened to find a new business to follow up KURALON, and to improve development efficiency by concentrating various aspects of the development system. Against this background, the Research and Development Division selected four research areas with future potential, namely low-pressure polyethylene, polyacetal resin, ethylene VAC, and man-made leather. In the end, ethylene VAC copolymerizing resin and man-made leather were selected. Synthetic rubber was added later. 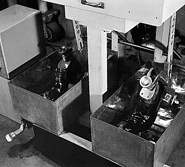 Research and development of new fibers began around 1961. The Research and Development Division studied copolymerization and polymer blending as one area of new fiber research. It also worked to develop a technology for creating and testing new high-performance fibers using a mixed melt-spinning method, which consists of blending two different types of polymers.

However, it was one setback after another. The R&D team attempted the melt-spinning method to combine nylon and polypropylene, but the experimental fiber that resulted retained both the merits and demerits of the original materials.

After several more failed attempts, one of the R&D scientists playfully said, “Hey, why not remove one of the components after blending and spinning?"

This idea borrowed from the process of creating nylon coated fabric,1 which was already available on the market. The scientists thought, “If we can make synthetic leather by coating woven material with nylon, what would happen if the nylon is eluted and coagulated from the blended-spun fiber of nylon and polypropylene?” This idea sparked the creation of the world’s first man-made leather – CLARINO.

Taking on the Most Difficult Case – Shoes 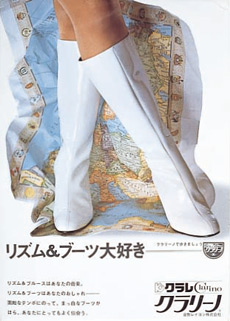 Advertisement for boots made with CLARINO

That playful spirit and resulting idea led to the creation of a product with a texture very similar to that of natural leather. The blended fibers were shredded into fine pieces and filtered. Next was the process of turning it into a nonwoven fabric. The nylon was then eluted and coagulated. “We dyed it. It looked almost like real leather,” a scientist remembers. The structure of the test material could not be confirmed because the lab was not equipped with an electron microscope at the time. Even so, the new material moved from the research stage to the development stage.

The biggest weakness of the test material was strength. The R&D team worked to overcome this problem. They would not be satisfied with the quality (even if it was acceptable for a test material) until they could create a man-made leather of suitable quality for shoes. It had to be tough enough for shoes.

“We wanted to take on the most difficult application of the material. If we could solve that, we believed it would lead to future enhancement of the product.” The R&D team wanted to create a material that didn’t just look like natural leather but also had a similar structure. They worked to improve its functionality to make it even better than natural leather, and to surpass similar materials already on the market, such as vinyl chloride leather or synthetic leather.

To strengthen the test material, it was necessary to create a three-dimensional nonwoven fabric structure, in which the fibers intertwined in a way similar to natural leather. The R&D team visited an equipment manufacturer in Osaka and repeatedly produced test samples. After creating 20 to 30 samples, team members took them to shoe stores. The samples, however, broke easily. Day after day, the team returned to lab with only broken samples.

The members were committed to overcoming any challenge. They believed in the mission of developing a material suitable for shoes.

“Even if we end up successfully developing a new material, that’s not the end. We still have to create a marketable product out of it. The real start is only after we convince customers of its merits. An increased R&D budget and new equipment comes after that.”

The next obstacle was footwear testing. In shoes made with man-made leather, the part of the shoe between the instep and the toe that bends easily cracks. This lack of flexibility of the blended fibers and the sponge-like binder was the problem. The binder, however, was necessary to create the three-dimensional nonwoven fabric structure. Polyurethane was selected as a replacement, but another problem soon emerged. The team had to rely on expensive imported polyurethane as it was still scarce in Japan. For this reason, a method was developed to create the sponge-like binder by coagulation in water of the nonwoven fabric after the polyurethane has been absorbed. The main manufacturing method for CLARINO was born.

After the prototype was finally completed, one of the R&D team members slept in them that very night.

In July 1963, a development committee was established in the Kurashiki Research Laboratory, and a project team was organized to develop new products. In November 1964, test production began and a dedicated sales team was set up at the head office.

There were still many who opposed promoting the new material. They believed that it was too great of a risk for a fiber and textile manufacture to attempt to enter an unknown field like man-made leather. Then President Soichiro Ohara broke the deadlock. He said, “It is beneficial for the nation to replace a natural material with an artificial one.” After all, rayon had replaced silk and PVA fiber had replaced wool. For a company that had been successful in developing these systemic materials, the development of high-quality man-made leather was a great opportunity.

A Fanfare That Heralds the March to Success 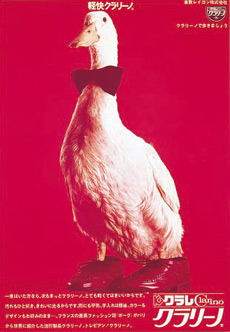 An advertisement featuring Japan’s most popular duck and CLARINO.

A name was given to the new material when construction of the test plant began in 1963. President Ohara, who loved classical music, once gave a PVA fiber the name CREMONA after the city in Northern Italy where famous string instruments were made. Regarding a new product’s name, he said the following:

“I expect the new product to be like the brass instrument section of an orchestra. I hope it will blare out a fanfare to give the audience a sign of the procession of a march, exceeding even CREMONA.” The product was given the name CLARINO, after an old type of trumpet.

The pilot plant was built on the premises of the Kurashiki Plant in 1964. Initial production capacity was set at 10,000 square meters of material per month. The establishment of a mass production process was set to begin operations after six months. Numerous setbacks plagued the early test runs. For example, less than one meter out of every 100 meters produced was viable or the substrate looked more like a squeezed towel than leather. Soon, however, the test samples began to receive praise with comments such as “some people couldn’t tell the difference between CLARINO and natural leather.” Kuraray decided to build a mass production plant on the premises of the Okayama Plant with a production capacity of 150,000 square meters per month. The CLARINO manufacturing plant was completed in 1966. 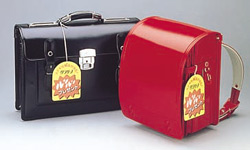 School bags made with CLARINO

Soon after production commenced at the Okayama Plant, a new problem emerged. Hundreds of pairs of shoes were returned as defective every day. The reason was the appearance of “star-shaped cracks” on the shoes. The R&D team had already overcome the flexibility problem in the test production stage, so the cause of these star-shaped cracks on the surface around the instep was difficult to identify due to the use of blended materials in the product. Sales was halted and a total of 100,000 pairs of shoes were recalled.

A range of tests were carried out on defective shoes to find the source of the problem. Tests included looking at the cracks under a microscope, bending the material against itself, nonwoven fabrics strength analysis, and evaluating the shoes for urethane deterioration, among others. The R&D team continued to investigate but struggled to find the cause of the cracks. Fortunately, the answer was found during a second round of footwear tests. It was discovered that some people experienced the problem while others did not. For the people who experienced the problem, it happened no matter how often they switched to a new pair of shoes. Sweat was causing the shoes to crack. If the sweat was alkaline in nature, the urethane deteriorated. When the deteriorated urethane reached the surface of the man-made leather, it formed star-shaped cracks. 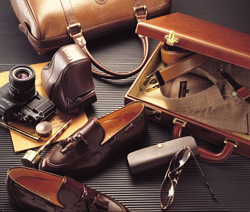 The R&D team reviewed the production techniques in terms of performance and quality. They examined the problem from various angles, not just the issue of the cracks.

CLARINO made a new start and the business rapidly expanded. The technology behind the product received many prestigious awards from academia and science associations. Both domestic and international sales grew steadily, backed by a popular series of advertisements featuring a duck.

The CLARINO product lineup continued to grow. The first new product was a soft-type man-made leather that was developed in 1969. This was soon followed by a suede-type and a nubuck-type, thus expanding the areas of application. The quality of these products has been highly praised by the fashion industry. CLARINO is a material that has stood the test of time.