Lightweight, Highly-Functional Resin That Is as Strong as Metal
Use of Laser Transmission Grade GENESTAR Grows in Automotive Applications

Kuraray Co., Ltd. (Headquarters: Chiyoda-ku, Tokyo; President: Masaaki Ito; "Kuraray") today announces the expansion of applications for GENESTAR, a highly-functional polyamide resin that the Company developed, to include auto parts due to its high laser transmittance. Going forward, we aim to expand use of this resin in electric and electronic components. 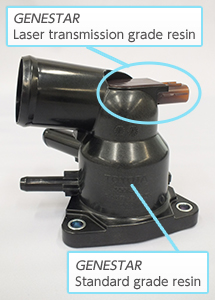 We provide the ability to download images by clicking on them exclusively to the news media.
Please contact the Kuraray Corporate Communications Departmentif you wish to use this service.