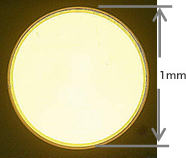 Kuraray Co., Ltd. announces that, following the receipt of major orders for plastic scintillation fiber ("PSF") from two U.S.-based elementary particle research laboratories, it is starting product deliveries to the Fermi National Accelerator Laboratory and the Thomas Jefferson National Accelerator Facility, where PSF will be used as a detector material for studying neutrinos and quarks.
PSF is a type of plastic optical fiber that was developed by Kuraray in the 1980s as a material that can be used to detect radiation, utilizing manufacturing methods found nowhere else in the world. Following this development, Kuraray took steps to improve the quality of this material in light of its steady efforts to maintain a continual supply of PSF to a wide array of research institutions and accumulate expertise in related technologies. Such research institutes include the High Energy Accelerator Research Organization in Japan and the Swiss-based European Organization for Nuclear Research (CERN), which possesses one of the largest high-energy accelerator facilities in the world. As a result of these efforts, PSF has become the de-facto standard for radiation-detecting materials, leading to this major order, which is nearly equivalent to the total amount of shipments Kuraray has made over approximately the past 20 years.
Research into neutrinos and quarks-for which PSF will be used-builds upon that conducted by Masatoshi Koshiba, who won the Nobel Prize in Physics in 2002, and the team of Makoto Kobayashi and Toshihide Maskawa, who won the Nobel Prize in Physics in 2008. The results of this research are highly anticipated.
In addition, PSF is expected to be used as a material for detecting dark matter, an activity that has become more widespread of late in the field of astrophysics.
Taking great pride in the contributions being made to leading academic research activities through materials developed using the Company's proprietary technology, Kuraray will continue to promote the development of PSF technology as it focuses on pioneering new areas in which this material can be applied.

Plastic Scintillation Fiber (PSF)
The core (interior) is composed of a polystyrene resin that contains a florescent agent, while the clad layer (exterior) is made of a plastic optical fiber that utilizes Kuraray's proprietary double-layer methacrylic resin construction. Possessing illumination properties that can be applied to radiation, PSF has been used as a radiation-detecting material for 20 years.
Owing to its proprietary manufacturing method, Kuraray has succeeded in manufacturing a product that features superior optical performance and dimensional precision. PSF is manufactured at the Niigata Plant, which produces methacrylic resin.
Fermi National Accelerator Laboratory and Thomas Jefferson National Accelerator Facility
Both facilities are national particle physics research facilities funded by the U.S. Department of Energy. Along with the European Organization for Nuclear Research (CERN), Fermi National Accelerator Laboratory has one of the largest high-energy accelerator facilities in the world. The Thomas Jefferson National Accelerator Facility is a world-leading nuclear physics research facility.
Neutrinos
A type of elementary particle characterized by having weak interactions with other elementary particles (matter), neutrinos produced in outer space pass through the Earth. Masatoshi Koshiba received the Nobel Prize in Physics for being the first to successfully detect the presence of neutrinos in outer space. Nevertheless, the definite value of neutrino mass has yet to be determined.
Quarks
This is another type of elementary particle commonly referred to as the most elemental particle from which matter is composed. For example, protons and neutrons-components of atomic nuclei-are composed of three types of quarks. Makoto Kobayashi and Toshihide Maskawa received the Nobel Prize in Physics for successfully postulating the idea that six different types of quarks exist (the Kobayashi-Maskawa theory).
Dark Matter
Numerous methods are used to evaluate the matter that composes outer space. Such matter is said to be ten times greater than the matter that is visible by light. Dark matter is matter that cannot be observed. Neutrinos and other elementary particles are regarded as candidates for dark matter.